Continuation of the story of Bishopsteignton Football Club from the 1990s up to 2020 when they celebrated their 100th anniversary.  Our story will include the Club’s ‘highs and lows’,  those that helped to make this club successful, a gallery of photos of players and managers, some artefacts.

1990s, 2000s, Trophies Presented to the Players, Cups the Club Played in throughout the Years, From the Past to the Present,

How many players can you recognise in the following pictures that were taken in the early 90s? 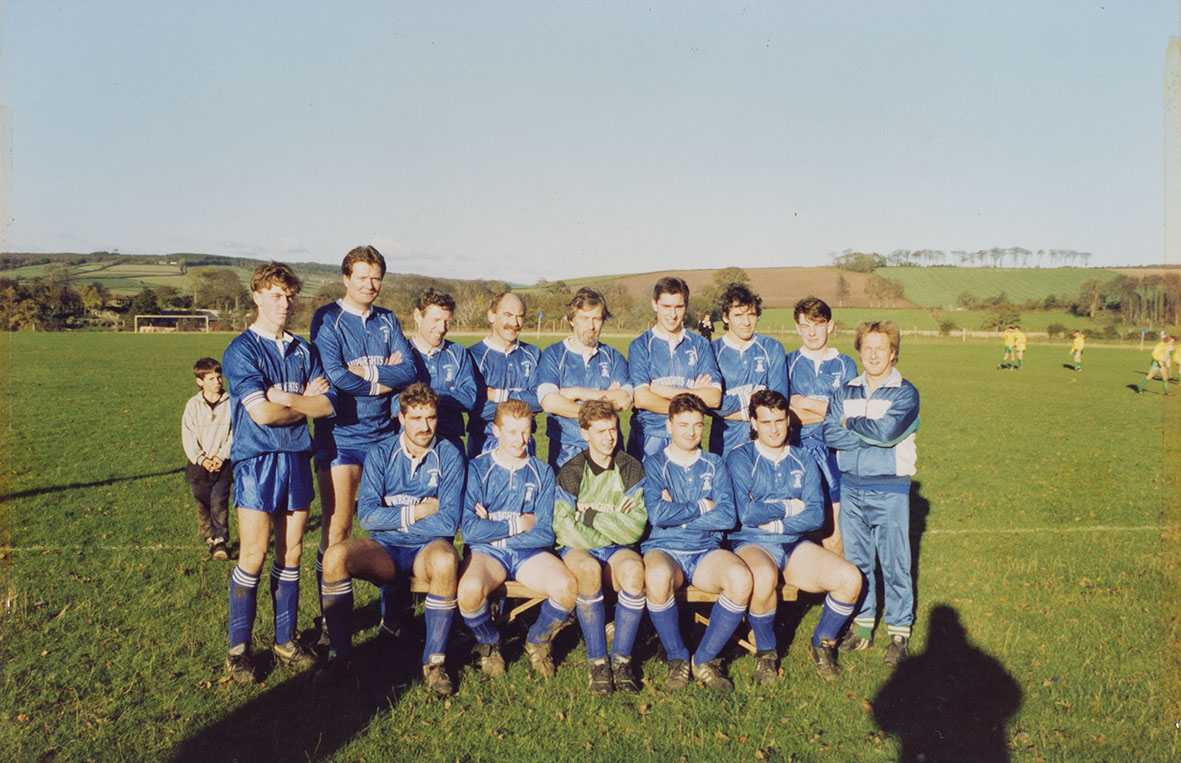 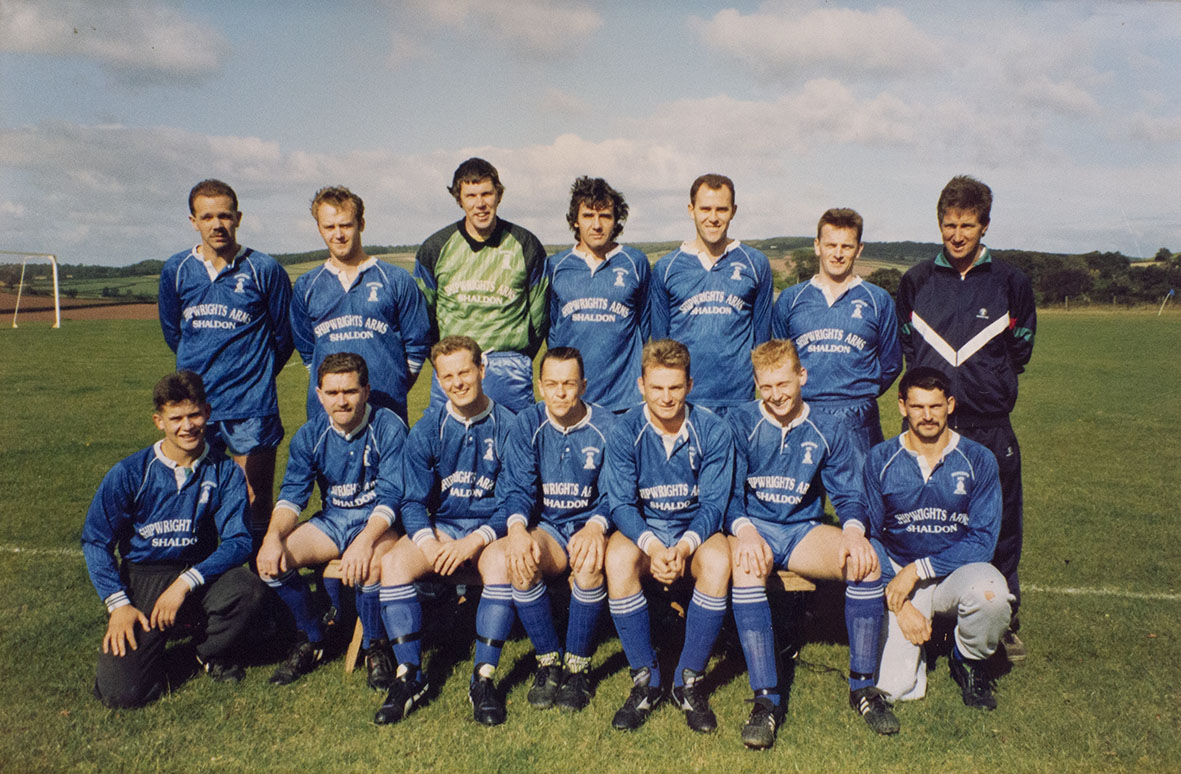 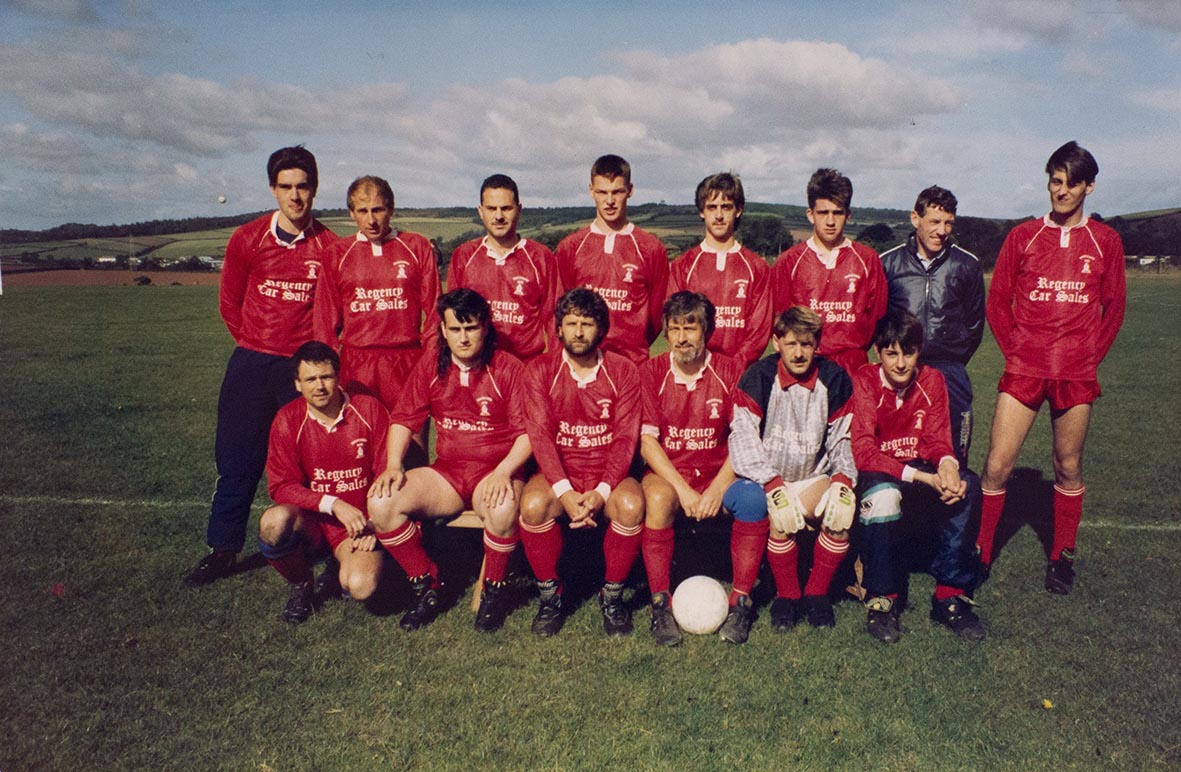 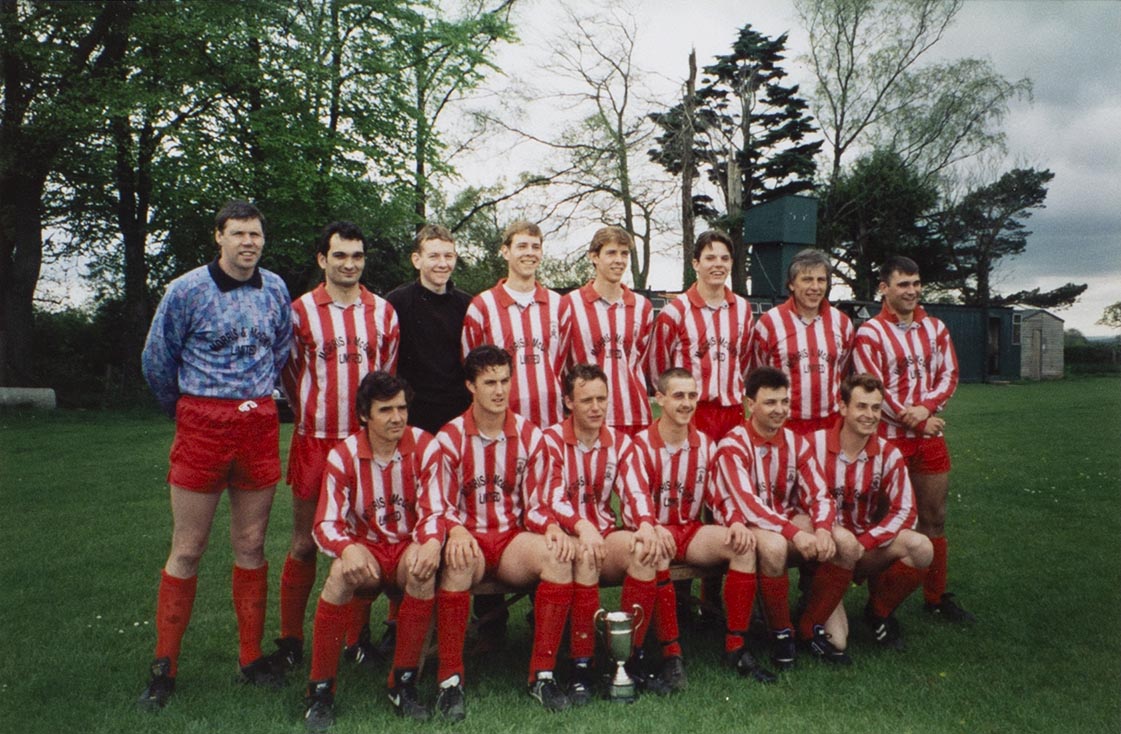 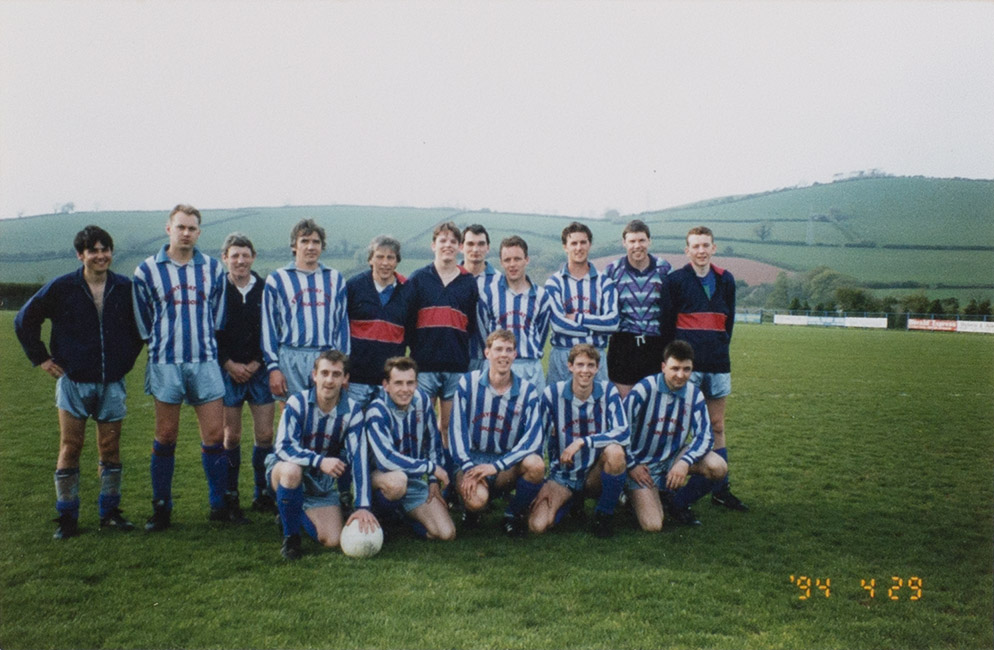 It was documented on a local paper clipping that 1990 saw Bishopsteignton United Football club becoming a family affair with no fewer than four father and son combinations playing, resulting in a blend of youth and experience within the club.

In the season 1995/96 Programme Bishopsteignton United consisted of the following teams: First Team in Division 2, Second Team (Reserves) in Division 4, Juniors (aged 7-11) and the Veterans (over 35’s).

As from the below programme Bishop United reached the Lidstone Cup Final in this season. 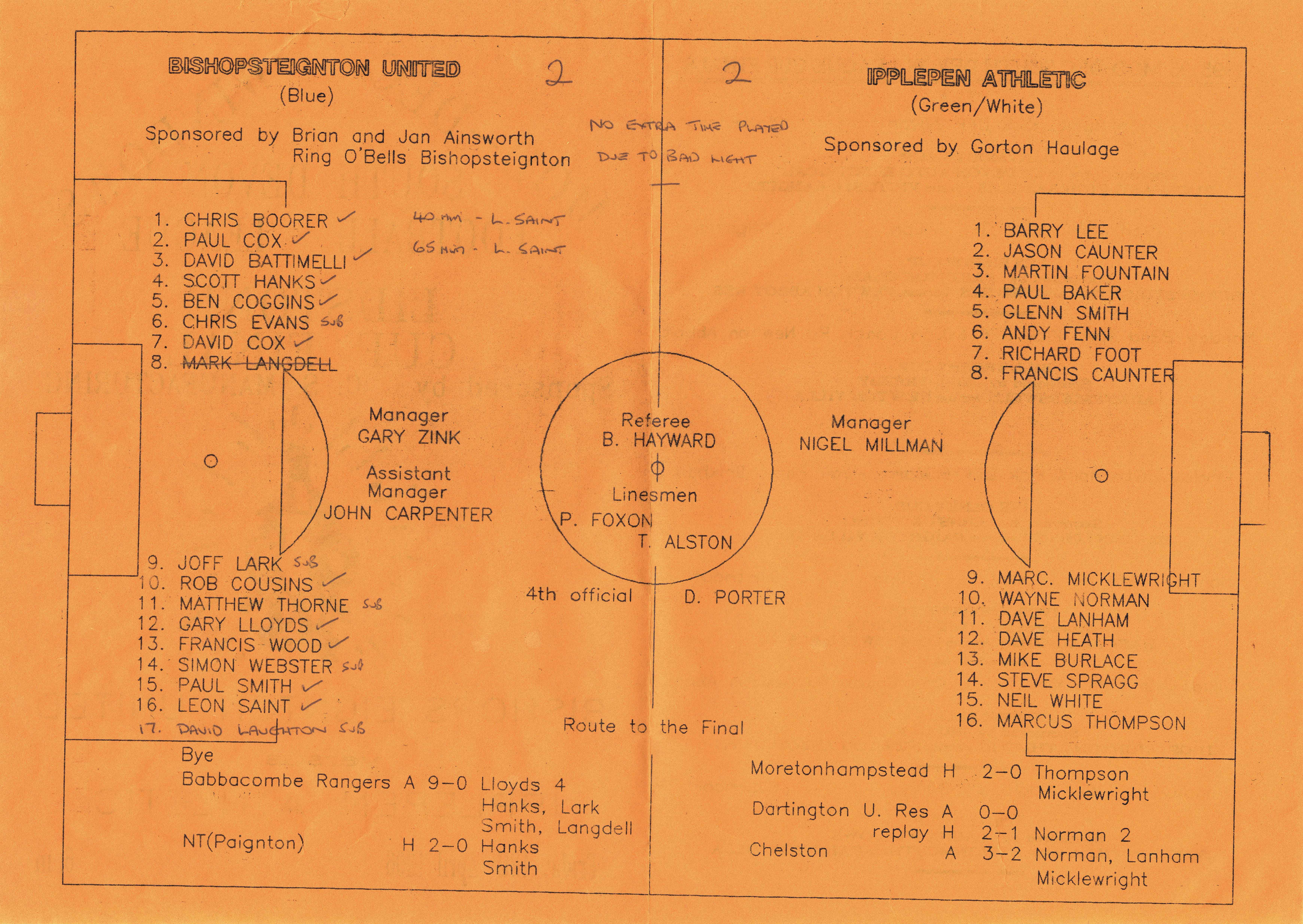 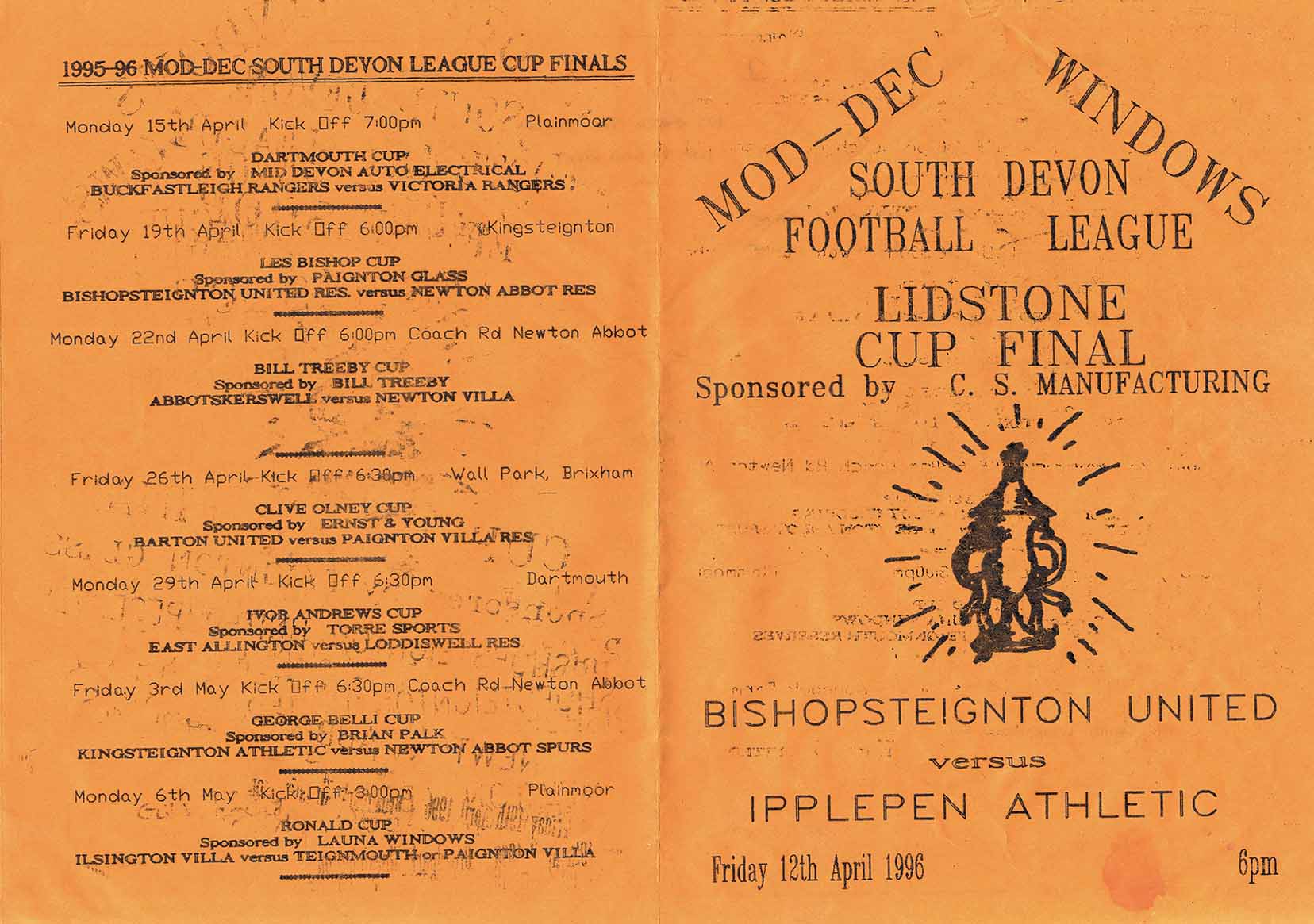 The first game played resulted in a 2 -2 draw against Ipplepen Athletic but due to fading light the referee refused to play extra time.  Bishop made no mistake in the replay game and held the trophy up after a successful 4-1 win.

Bishop Reserves reached the finals of the Les Bishop Cup after beating a battle against Hele Rovers side in the semi; however were defeated in the finals against Newton Abbot Reserves 2-1.

It was recorded in a local newspaper that although the season 1997/98 hadn’t produced silverware it had been successful.

In the 1998/1999 Programme it was stated that the Under 13’s were playing their second year and reached the League Cup semi-finals and finished overall 5th in the League the previous year.  It also commented that much needed money and support enabled provision of better facilities for the club, for example hiring the all-weather pitch at Teignmouth Community College for training and it was deemed that the pitch at Humber Park was one of the best in the South Devon League.

Bishopsteignton United 1st Team kicked off the season 1998/1999 with an overwhelming victory over Dartington (6-0) and continued their good form throughout the season.  This success ended up as them being ‘runners up’ in the league and were promoted to the Premier Division, they also became Dartmouth Cup winners against Plainmoor.  With 11 consecutive wins, this season was the most successful in Bishopsteignton United’s 79 year history.

The nineties produced many goals, with the top scorers recorded annually as seen below:

The season 2015/16 provided a difficult year for the club but saw the end of it with the Bishops holding their position in Division 2 after surviving a relegation battle.  This year was also difficult for the club ‘off the field’, with the death of Scott Hanks.

His memory goes on and the club support and organise a yearly Memorial Day, which is a family friendly football day for players and their families, together with a Trophy Match to raise monies for Rowcroft Hospice.

There was success for the Reserves in the season 2016/17 when they came from behind to win the Trebby Cup (3-1) in the WBW Solicitors League against Babbacombe Corinthians.

In July 2019 it was announced that Bishopsteignton United were pleased to announce Kerry Perriton as its new manager for the coming season, who has had a long relationship with the club.

Trophies Presented to the Players 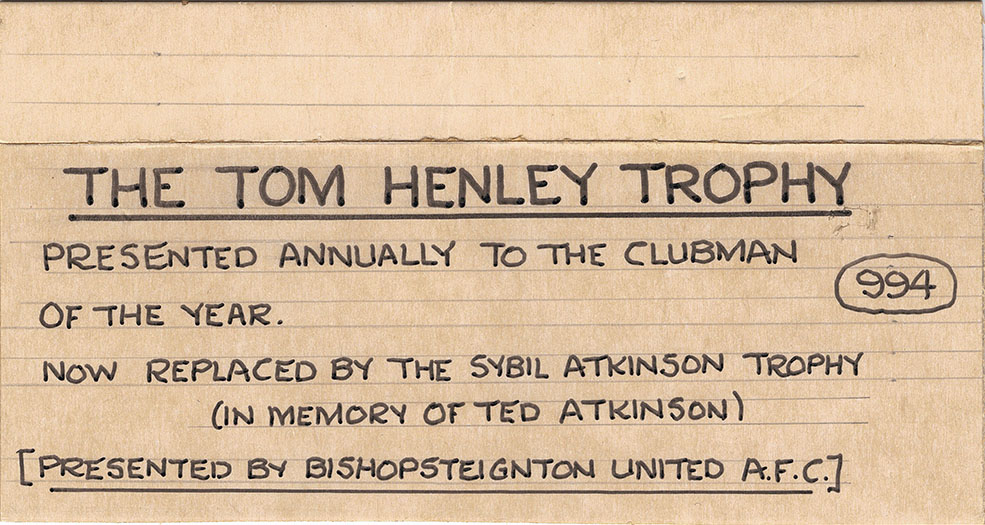 Cups the Club played in Throughout the Years 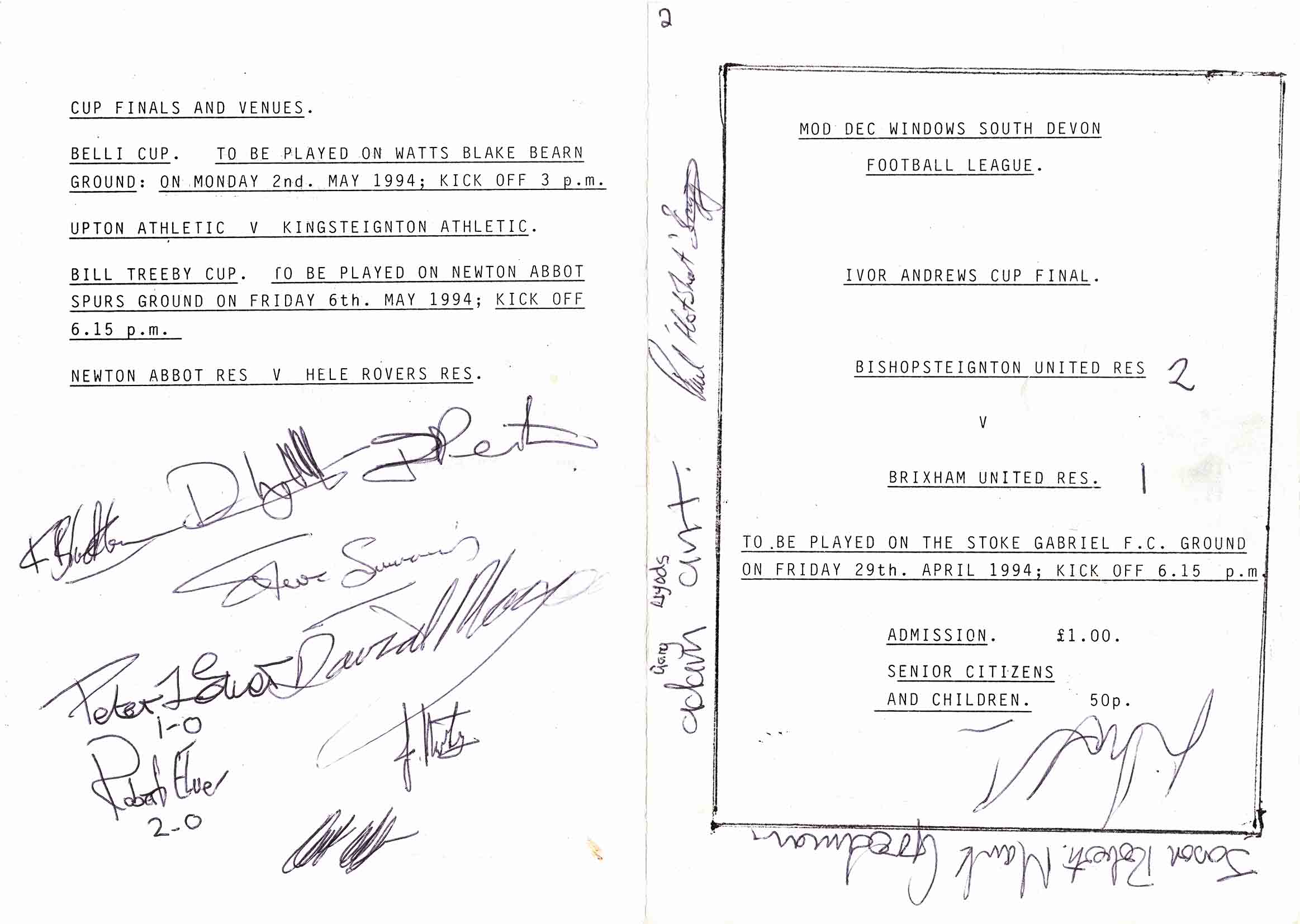 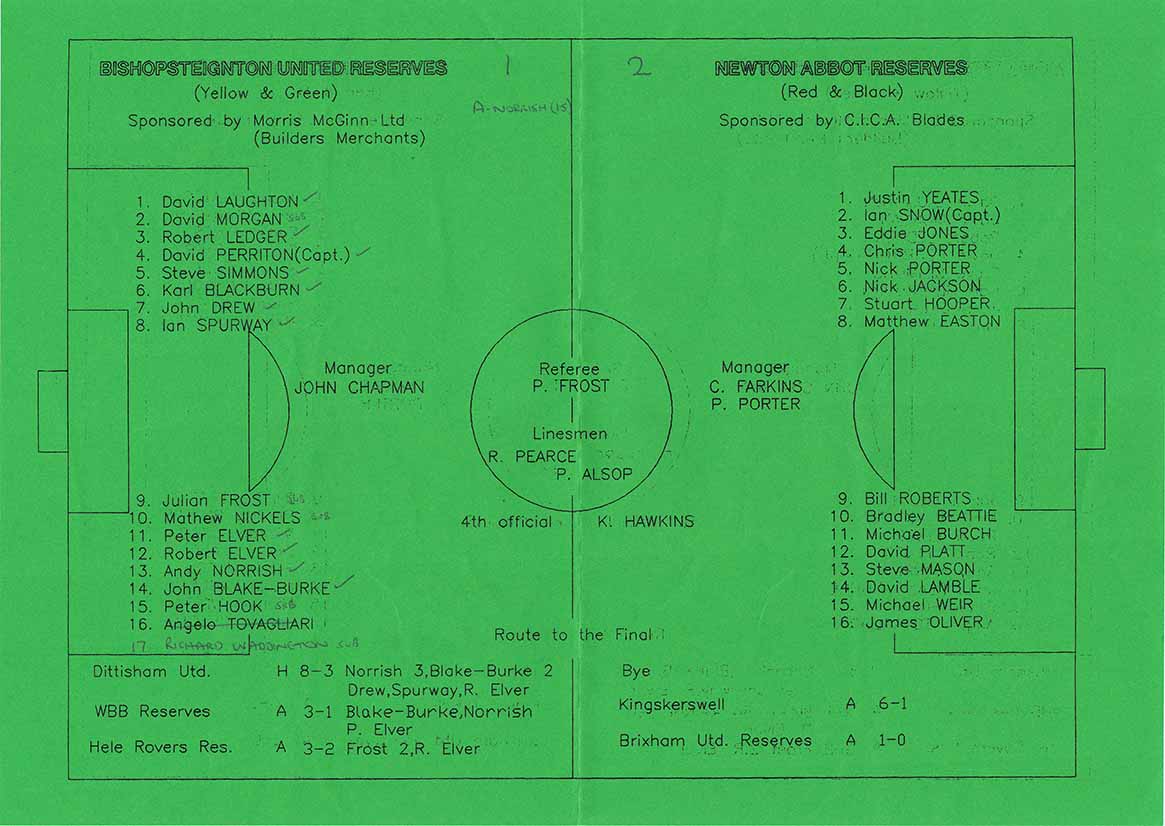 From the Past to the present

It was also announced at the beginning of the season 2020/21 that the club was again under new management of George Minty, who massively thanked Kerry Perriton for his work over the last 2 years and leading the club to a very strong season the previous year, ensuring that play continued in Division 2.

Unfortunately, Covid has put a stop to play since January 2021 so it will be interesting to see how the season 2020/21 finishes and what effects the pandemic has had on the club.

This research has found many successes for the club and its players over the last 100 years and hopefully there will be many more to come in the next 100 years.

If you have further information about Bishopsteignton United we would love to hear from you, there is always more stories to be told.