On 24 April 2019 Peter Wade gave a talk for Bishopsteignton Heritage entitled ‘Rails Through Bishopsteignton’, this article is a summary of that talk.

On 24 April 2019 Peter Wade gave a talk for Bishopsteignton Heritage entitled ‘Rails Through Bishopsteignton’, this article is a summary of that talk. 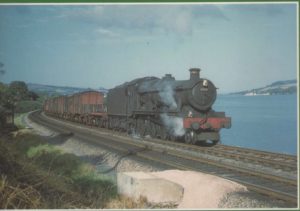 The railway had reached Exeter from Bristol by 1844 and the next section to Plymouth was soon being planned, this was to be the South Devon Railway. At that time railways were built by separate railway companies, the grand days of the GWR had yet to arrive. The engineer for the SDR was I K Brunel and the line as far as Teignmouth was opened in May 1846 and then to Newton Abbot on 31 December 1846. We are fortunate that in 1848 W Dawson from Exeter completed a set of watercolours of the newly constructed line from Exeter to Totnes which give us a great idea of the line at the time. His views at Flow (Floor) Point, Red Rock, showing the bridge that was built to give access to Luxton Steps and the ferry to Coombe Cellars, and the Summer House sites, where Rev. Commyns Summer House and the atmospheric pumping house on the land below Ware Farm could be found. These scenes have changed with the pumping house being demolished in the 1850s, but are its footings still there; a scan of the area would be interesting.

When the line was built it was single track and I K Brunel chose a Broad Gauge design, meaning the gap between the rails was 7’ 1⁄4” rather than the usual, or ‘Standard Gauge’, of 4’ 81⁄2”; George Stephenson had pioneered this gauge. The Broad Gauge was eventually replaced in 1892. The power for the trains was new, it was  ‘Atmospheric Power’, a new form of power for the trains that Brunel and the SDR had opted for, because of the steepness of the hills after Newton Abbot. A pipe was laid down the centre of the track and pumping houses were set up to suck out the air and create a vacuum that pulled the trains along. However, it did not work well enough and in September 1848 it was replaced by steam locomotives. The 1847 timetable shows the line was up and running, if erratically because of the issues with the atmospheric trains, and that there were seven trains every weekday running between Exeter and Newton with a journey time of around an hour.

The section of the SDR passing through the Parish of Bishopsteignton begins, for this study, at Teignmouth. The original station was of the ‘train shed’ style, shown above, but was rebuilt in 1894. Before that, in the 1870s the line had been doubled (a second line added) and to allow this two tunnels in Teignmouth were removed. The one at the western end of the station was
removed in 1881 with the creation of the dramatic stone
retaining wall. Next came the east tunnel at Eastcliff which
was uncovered in 1883, it had been of cut and cover
construction. It was removed and the bridge over the gap
now gives an iconic entrance into the platforms for trains
arriving from Dawlish. Teignmouth Docks were also being
developed and were soon linked to the railway; in the
1850s the Old Quay was redeveloped and became a major
part of the line’s work. The later Western Quay was opened
in 1896 and increased the close work between the docks and the railway. The trains left Teignmouth, passing the docks, the gas works (more on this later) and passed along the sea wall close to the rugby/cricket ground and Shaldon Bridge.

The tracks enter Bishopsteignton Parish around what is now the Morrisons’ traffic lights and another of Dawson’s watercolours shows Teignmouth Gas Works at this point; it had been built in 1840 therefore pre-dates the railway. The coal to make the gas (it was cooked in large ovens called retorts) was brought into Teignmouth Docks from South Wales and brought round from the docks in barges or lighters. The site is now a boat yard having closed as a gas works in 1956. The gas works was not actually connected to the railway line until 1925 and only had a siding long enough for 6 coal trucks, with a booked coal train once a day. The siding was removed from use in 1965. This siding can be seen on the left in the picture above.

From the opening of the line the gentry of Bishopsteignton had agitated for a station for the village; here is the story of it not happening.

  1852: SDR asked if “during the summer months, one train each way might be allowed to stop at Bishopsteignton for the Archery Club”
1857: Western Times noted “for some time past much has been said about making a siding at Floor Point …. Many thousands of tons of coal, culm, and timber are annually imported here”
  1861: Rev. Commyns and Mr Templar Presented “a memorial requesting the accommodation of a station at Bishopsteignton”. A letter to the SDR asked that a station should be erected “near the ferry across the Teign”. It was noted that “At present the inhabitants of Bishopsteignton, among whom there are a large number of resident gentry, have to a distance of more than two miles to the railway station”
  1913: The arrival of railmotors on the line and the building of a halt at Dawlish Warren, raised false hopes of a halt at Bishopsteignton, but nothing came of it.

Villagers had to make do with various village transport firms making journeys between Bishopsteignton and Teignmouth. The first company was Meeks, who provided a horse bus, shown below left. Next came H D Gourd & Son of Bishopsteignton in the late 19th century who made a daily run to Teignmouth Station. In 1898 they began a passenger bus service, using horses, until acquiring motor buses around 1914, as seen below. A second company, Harveys of Bishopsteignton also had a service but people found Mr Harvey miserable, so they preferred to use Gourds. Gourds was taken over by Devon General in 1951.

Bishopsteignton never did have a railway station but in 1907 it did get a signal box, known as Floor Point and later Bishopsteignton Box. This was to reduce the gap between the boxes at Teignmouth Old Quay and Newton Abbot East; the first signalman was W J Symons, followed by W Horrell. The box closed in 1912, but a new one was built in 1923 as a consequence of increased traffic. The signalmen obtained their water from Flow House and coal was dropped off by a passing train. This box was closed in 1969. Another piece of railway history building can also to be found in the Parish, along the rails at Red Rock, where Railway Chalets were built in the late 19th century. These gave railway workers and their families the chance to have a holiday or recuperate from illness; they were also used during WW1 by soldiers recovering from wounds.

Although Brunel’s amazing design and construction of the SDR along the coast has made it one of the most popular stretches of railway line in Britain, it has created problems; the action of the sea on the sea walls, cliffs and railway has often brought the line to standstill. In the 1930s this, and the need for greater track capacity in the summer, produced a fascinating plan that would have had a huge impact on Bishopsteignton. This plan became known as ‘The Dawlish Avoiding line’ and the map below shows the proposed route. The idea was to branch off the mainline at either Exminster or Powderham and cut behind Dawlish and Teignmouth, with four tunnels being cut, and emerge to the east of Bishopsteignton. It was planned to be 60 feet above the natural ground west of Dawlish with a nine arch red sandstone viaduct bridging a valley. It would sweep through the land below Bishopsteignton and re-join the mainline just before the canal bridge at Newton Abbot. There are plans and drawings from as early as 1931 that show planning was well advanced and in 1936 & 1937 GWR (Additional Powers) Acts were passed, land was bought and four Boreholes and twenty five trial pits near Dawlish were completed.

The impact on Bishopsteignton would have been significant with the line emerging from the hills east of the Teignmouth road with a tunnel entrance below The Lea, ploughing through a cutting and then crossing the Teignmouth road on a skewed three arch bridge; the arches were to be of a 56 foot span at either end, and 114 feet in the centre. This was then to join a 65 foot high embankment running half a mile to Flow Lane, right across what became Jack’s Patch. When it reached Flow Lane the land would be level again. It was then to head for Newton Abbot across the fields, running variously in low cuttings and on embankments. Thankfully for Bishopsteignton, but not the passengers who use the line, rearmament for an impending war made the plan too costly at that time and by the 1950s the demand for summer trains had fallen and consequently it was never built.

Another very unusual ‘Railway’ feature of Bishopsteignton was that it had an aerodrome, used by railway owned air services. It was built at Haldon, next to the Golf Club and it was very much the fashion of its time. The site was open and flat and had a good road to ferry the passengers to Torquay, but it did suffer from fog. The aerodrome was the brainchild of Bill Parkhouse of Agra Engineering in Teignmouth and he erected a hanger and reseeded the land. The first public flying meeting was on 21 September 1929 and in the 1930s the Teignmouth Air Race Cup was held (the cup can be seen in Teignmouth Museum). The British Hospitals Air Pageant visited in 1933, and Alan Cobham brought his famous Flying Circus to Haldon in the 1930s. In 1933 the GWR began a daily air service from Birmingham to Plymouth, calling at Cardiff and Haldon, with the first flight being on 12 April 1933. The flight from Cardiff to Haldon took 44 minutes, with the fare being £3 and a bus connection to Torquay being provided. Incredibly the plane only carried six passengers! In 1934 Rail Air Services Ltd took over the running of the flights (using Denbury instead in 1935), and from 1934 Provincial Airways also used Haldon for a service.

Aeroplanes such as the Westland ‘Wessex’, the De Havilland ‘Dragon’ and the ‘Saturn’, shown above at Haldon, were regular visitors to the aerodrome. 1937 the Straight Corporation took over the management of the aerodrome, with regular summer services being provided.

The beginning of World War II put an end to the services, with the Admiralty taking it over for use by the Fleet Air Arm; it was known as Heron II. It was used by communications planes and later 794 Squadron was based there with ‘Skuas’ that were used as target tugs. 761 Squadron, with its ‘Masters’, also spent time at Haldon. There was an abortive effort to restart the aerodrome after the war, but it soon fell into disuse. All that remains is the fireplace of the clubhouse, but a plaque has been put on the site to remember this unusual piece of the Parish’s history.

As for the mainline, well the GWR is back, as First Group has rebranded its trains, with the new Inter-City Express Trains (IETs) now in service and reducing times to London to barely three hours. The Rails will continue to go through Bishopsteignton for many more years.