Since the COVID 19 Lockdown we have all been enjoying our Thursday evening applause for the wonderful NHS, but last week it went just that bit further! Something amazing took place across our village. Bishopsteignton Heritage is proud to be able to produce the following video from the recordings made simultaneously during the event.

Two weeks ago Jason McMurray, a keyboard player, composer and arranger, saw a post on Facebook calling for singers to join in a live version of ‘Over The Rainbow’ at 8pm on Thursday last. Jason, who has lived in Bishopsteignton for only two years, has spent that time engendering a huge resurgence of live music in the village, with his monthly jam sessions at the Ring of Bells pub and numerous special concerts.

Bishopsteignton has always had an enormous amount of musical talent amongst its residents, so Jason Mcmurray decided to take things a step further and try a live version of the song incorporating all the musicians who wanted to take part, all performing at their own homes and at a safe distance from each other.

In total, 21 musicians were amplified and recorded, and many more street singers and acoustic musicians joined in. It was a brilliant experience which, once again, brought our wonderful village together. This video brings the occasion to life by drawing together the simultaneous performances as filmed by the village and preserves it as a record of Bishopsteignton during this period of Lockdown.

Below are some of the individual videos recorded simultaneously from which the edit above was made:

Jason had this to say:

“Our village thrives on music and performance. Some of the best amateur and professional artistic souls hail from Bishopsteignton. We are used to regular Jam sessions, shows, plays, gigs, festivals and parties. In these difficult times of which I am certain we will emerge with more patience and gusto we have to find ways of achieving some kind of normality. For me it is playing live music with my friends. Now not possible in the usual way we have to find other ways of achieving this. We have tried the internet…but its slow and frustrating at times. We need a feeling of unity and a sense of providing a nice time for our audience. We also need a reason to play! Supporting the NHS is on everyone’s minds and a very good reason to show our support and respect to those on the front line.

This village is full of musicians; most have become good friends. All having PA systems and loud amplifiers. Is it possible to all play together from our houses if we are loud enough? Can we flood the village with music? How do we communicate? Is it possible to keep in time? Everyone I contacted was on board straight away. Lots of issues to solve!

‘Somewhere over the Rainbow’ was flagged on social media as being an appropriate song that the masses can sing along to. I thought can we take it a step further and play it live too?

On line chat groups set up, song sheets sent, arrangement sorted. We will play one verse and chorus for the NHS, repeated for other key workers and once again for our own community. Keeping in time was an issue so I recorded a basic piano track in my studio that all the musicians could play and sing over making it their own. Using the speaking clock we would all start at exactly 8.03PM. The sound check was amusing. Everyone playing a 20 second slot every minute for 15 minutes. We could almost hear everyone! But surprisingly it worked!

Everyone played, keeping at a safe distance from others. I played piano throughout from my driveway with good friend and neighbour Yvonne Hellin Hobbs singing next door. We had Helen Garratt playing harp, Rob Bright and John Bessant playing electric guitars both from our band The Dead Ringers. Matt Parker playing drums, Martin Hill and Ian Roberts playing Sax. David Mitchell and Peter Hepworth both each playing guitar and singing. From the band Mothers Ruin we had Julian Neitrzebka on accordion, Lissie Durham on keyboards, Chris Code on acoustic guitar accompanied by his wife Chris, brother Nigel and Tess. Also playing John Morey on guitar with wife Jane playing violin. Quite a band if all on the same stage!

Our local pubs were hugely key to the success of this. From The Old Commercial Inn the land lord Michael Smith played his Organ from inside with the doors open. The beautiful voice of Michael’s daughter Mabel joined outside with James Day singing too. From the roof of The Ring Of Bells pub landlord Roger Gallagher was joined by his daughter Becky Gallagher. Her amazing voice echoing right across the village.

What I didn’t know at the time was nearly everyone was outside their front doors all singing and playing along with us. How beautiful. I just hope that after this horrible situation this friendship and camaraderie shall continue. Stay safe everyone.” 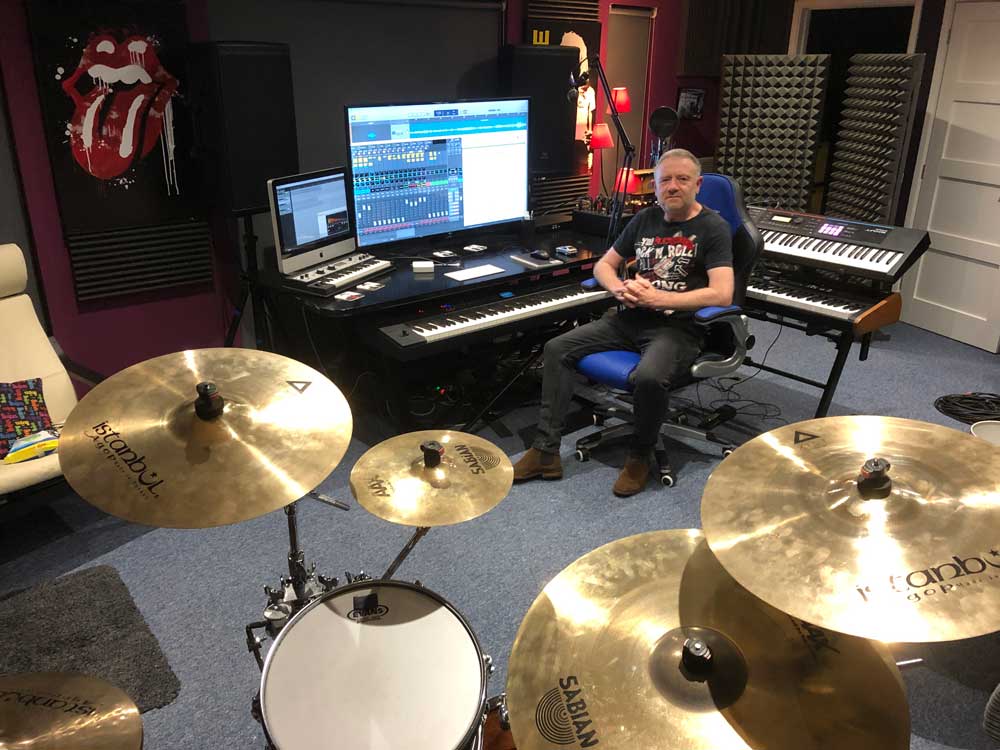 One Reply to “Over the Rainbow”