In this, the Platinum Jubilee year of Her Majesty Queen Elizabeth the Second, Bishopsteignton Heritage has prepared a series of articles featuring members of the village community who have, at times, been honoured by Her Majesty for services to the nation or the community.

The fourth of our series features  Christine Hill, MBE. Honoured in 2003 for her services to hospital entertainment as Founder of the charity MediCinema.

Christine Hill moved to Bishopsteignton in 2010 but had been coming to the village for holidays since her childhood. Her parents owned a house and a chicken farm above the village, which her aunt and uncle ran, and that’s where her childhood summers were spent on holiday from Derbyshire.

Early in her career she managed ‘Cosprop’, a film and television costume hire company in London. When she left that she went to work in the charity sector, but she always retained a fascination with the movie world and 35 mm film projection in particular.

Christine Hill moved to Bishopsteignton in 2010 but had been coming to the village for holidays since her childhood. Her parents owned a house and a chicken farm above the village, which her aunt and uncle ran, and that’s where her childhood summers were spent on holiday from Derbyshire.

Early in her career she managed ‘Cosprop’, a film and television costume hire company in London. When she left that she went to work in the charity sector, but she always retained a fascination with the movie world and 35 mm film projection in particular.

She became involved in ‘Tommy’s Campaign’, a charity formed to research premature babies and stillbirths, based at St. Thomas’s Hospital in London.  On one hot and sunny day in 1996, the nurses had wheeled the children out in their beds to see the boats on the Thames. Rows of beds with the children in them and the scene in front of them was like a movie. Christine thought, ‘That looks like a cinema. That’s what everyone needs in hospital, cheering up.’ Due to the nature of British weather, she knew that it would have to be inside.

I knew the Chief Executive of St Thomas’s because I was the coordinator between the special neo-natal unit and any press or TV crews that came in. I went to see him and told him about the idea for a cinema in the hospital, and he gripped the table and said:

‘You’re not going to ask me for any money are you Christine?’

I said: ‘Absolutely not, no. No NHS funding, it will be a charity and we’ll raise money for it.’

The idea was just to have one cinema in St Thomas’s but then one of the volunteers on Tommy’s campaign said that she had spoken to her husband about the idea; he was very interested, and he worked in the city. Christine met him and he asked:

‘Where do you see yourself in five years’ time?’

At that time there was something called PFI (Private Finance Initiative) coming up, where hospitals would be vying for patients to use them and their facilities, so they were going to want to offer the best possible facilities. He suggested that hospitals would want a cinema for their patients, so why stop at one? He said he would help, and he introduced Christine to lawyers who all did pro bono work. She had to set up a board of trustees, who were all fantastically helpful, and it went on from there.

The Unique Selling Point of her idea was to have cinema screens of proper size, with Dolby surround sound to create the real cinema experience in a designated hospital space, where patients could enjoy the very latest feature films. There would not only be cinema type seats, but also facilities for both wheelchairs and even hospital beds to be wheeled in. It also included the possibility for patients to invite family members and guests to join them.

The first cinema at St. Thomas’s opened three years later in 1999. By the time Christine finished her service with MediCinema there were seven working cinemas in hospitals around the United Kingdom. She was awarded an MBE (Member of the British Empire) in the 2003 Birthday Honours List. She remembers:

I was somewhat intimidated by the statute/charter that they sent. The language and the mention of Empire, but then you see the quality and the stamp, and you realise it isn’t a joke, its true! 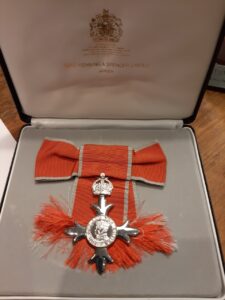 On the day of the presentation Christine was warned to arrive early, on one of the hottest days of the year. Her award was to be presented to her by HRH Prince Charles.

We waited a long time while all the honours candidates were preparing in halls of red and gold. There were huge portraits everywhere and you are suddenly conscious that you are in Buckingham Palace! We were told that when we were introduced to Prince Charles you are facing him, you shake his hand, and you have to come back three steps and curtsy. All I could think of was ‘Don’t fall, don’t fall’  He said to me, ‘So you do cinemas in hospitals’, and what was amazing about him, you knew he was doing this a hundred times in the day, but he does convince you that he is totally engaged in what he is saying to you, and that he is absolutely talking to you, he absolutely knows what you do, everything about it and he is genuinely interested. That is obviously something he has learned to do, but it is very effective.

After the ceremony her family took her to a restaurant in Convent Garden for a party, where the waiters lined up at the entrance and each touched her on her shoulder with a wooden sword as she passed. 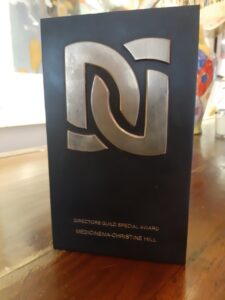 In the subsequent years Christine has received several other awards, some from the film industry, for her work with MediCinema, including two awards from the BKTS based at Pinewood Studios (now known as the International Moving Image Society, IMIS), a ‘Directors’ Guild’ award which was presented by director Michael Winner, and in 2018, the ‘1030th Points of Light Award’ for inspiring volunteering, awarded by then Prime Minister, Theresa May, and presented by Tracy Crouch, MP. 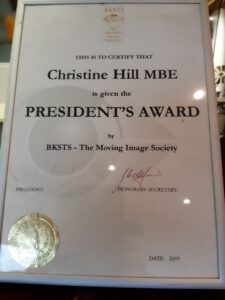 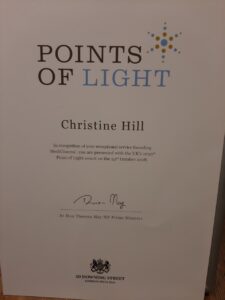