In this, the Platinum Jubilee year of Her Majesty Queen Elizabeth the Second, Bishopsteignton Heritage has prepared a series of articles featuring members of the village community who have, at times, been honoured by Her Majesty for services to the nation or the community.

The third of our series features Bishopsteignton resident John Wotton who was awarded an Order of the British Empire award in the 2004 Birthday Honours for services to healthcare and its promotion in the UK, internationally and the Far East, specifically in the Indo Pacific area. 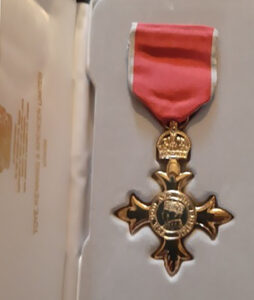 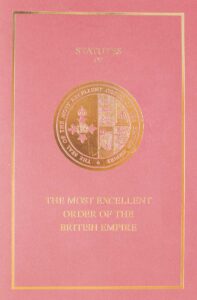 As the Chief Executive of Huntleigh Healthcare PLC, a technology based healthcare and scientific group in the UK, he was involved, along with a specialised team of engineers, in overseeing the development, manufacturing, education, promotion and the training of doctors and nurses in providing medical facilities to hospitals and outpatient clinics. The company employed some 5,000 people and exported all around the world.

John was appointed by the Prime Minister to the Committee for promotion of business, ‘The Business Council’, between the UK and, in his case, the Far East, along with a group of people from other industries. It was through this that he could utilise the contacts and the people he knew in the region, to set up education seminars taking people from the UK over there and vice versa.

The specific areas John was involved with were care of the elderly and diagnostics, equipping hospitals and outpatient clinics, to address ageing populations and domiciliary care. He says:

Because we take it for granted and a lot of places don’t. In some places the standards are higher than over here, and in other places a lot lower, so it was a case of bringing together experts from various fields of medicine in their home countries in a series of seminars and conferences from various healthcare disciplines in the UK to Singapore, Hong Kong, Thailand and Japan. I went through contacts over there either at the diplomatic level, or at the medical level.

John was on the sales and marketing side for a long time in healthcare, pharmaceuticals, and more latterly, in medical equipment, services and systems. Hence, that was the association he had built up over 40 years.

It wasn’t a case of having a full degree discipline. I learned a great deal, initially serving in the RAF Medical Branch, Casualty Evacuation Squadron. I picked up a lot of information as I went down the road, starting off in sales and then eventually into running a company. I was heading up a company that was engineering and science based. 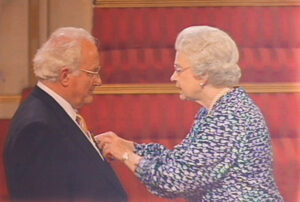 As with all the civilian honours, the recipients are informed a long time before the ceremony and then bound by secrecy until the awards are made public. John mentions:

In my case my sponsors included members of the diplomatic corps and the healthcare industry.

John and his family were invited to Buckingham Palace that year to accept the award from H.M. The Queen:

There were a lot of deserving people getting awards; KBEs, Military medals, CBEs, OBEs, MBEs and so forth. It was an interesting cross section of society, very well organised and quite relaxed in many ways, considering the scale of the event. There must have been about a thousand people present; guests and then award winners, but it was very personal, the Palace organises the occasion very well.

You’re taken for a tour around part of the Palace, you eventually end up in the Throne Room and you wait your turn and get called up to go and get presented, and then told not to trip over on the way out!

If you asked me ‘What did The Queen say to you on the day’, I haven’t the faintest idea. I can remember her replying, ‘Oh, that’s very interesting.’ She probably says that to everybody, but she’s very pleasant. You have a bar put on your jacket, and she hooks the award onto that bar. 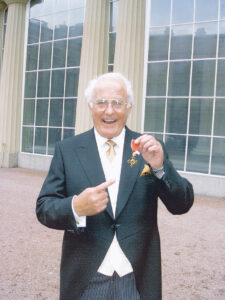 Then they have a photo session outside the Palace in the quadrangle, and then you toddle off. I had organised a lunch at the Reubens Hotel for the family, friends and colleagues in the company, about sixty of us in all. The whole thing cost a fortune because you have to pay for everything, souvenirs, photos, DVDs. It wasn’t a freebie that’s for sure! But it’s all very memorable, the sort of thing that happens once in your lifetime, unless you get an upgrade. They say to you ‘We’ll be in touch if you get advanced,’ as they call it. I’m still waiting!

Then they have a photo session outside the Palace in the quadrangle, and then you toddle off. I had organised a lunch at the Reubens Hotel for the family, friends and colleagues in the company, about sixty of us in all. The whole thing cost a fortune because you have to pay for everything, souvenirs, photos, DVDs. It wasn’t a freebie that’s for sure! But it’s all very memorable, the sort of thing that happens once in your lifetime, unless you get an upgrade. They say to you ‘We’ll be in touch if you get advanced,’ as they call it. I’m still waiting!

John retired officially in 1998 from Huntleigh Healthcare but continued to work with the government and the industry for about 10 more years:

I was the longest serving trainee retiree in the country, I couldn’t get to grips with retirement, so I became a director of the Zoological Society in Scotland, where we housed the famous Pandas.

The zoo was very different from what he had done before. He was a director of Edinburgh Zoo, along with many of the high and mighty in Scotland. 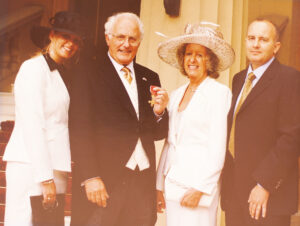 I think I was the only Englishman hired. Basically, they wanted my expertise in running a business, because they have all these charity organisations with all these well-meaning people running them. They don’t always have the expertise or the disciplines to do the job, so if they can graft on people from the outside world, it all helps. I saw it as an experience of learning, where I could then apply what I had learnt in the past to the zoo in Edinburgh and at the Highland Wildlife Park.

Then there were the Pandas. We got them on a 10-year lease programme from the Chinese Government, in order to breed them. Well, they haven’t bred as yet, and it’s unlikely that they will do so now. We still have an enormous number of visitors but there would have been so many more had there been a cub or two. It was about a million pounds worth of expenditure just to lease them from the Chinese Government and then you have to feed them. They consume 70 kilos of bamboo shoots a day! We were getting a lot of it from Holland, and it is the most indigestible material: if you try even chewing it, its just disgusting, therefore they have a lot of stomach problems. You learn a lot about it just being around these creatures. Very temperamental they are, big as well, 6ft plus tall when they’re on their haunches. They’re alright, they won’t attack you unless you attack them. If they feel threatened, they will lash out and they are massive.

The Highland Wildlife Park is like a Safari Park of five or six hundred acres, which you drive around. The park has a breeding programme for Highland cats with a view to introducing them into the wild again, but it’s meeting some resistance from the locals for obvious reasons. It also has animals you might find in the Tundra, the colder, more spartan population places around the world including Polar Bears and Bison.

We bred a Polar Bear up there and at the time it was the only Polar Bear that had been born in the UK since around 1966. I wasn’t involved in the day-to-day operations, unless asked, I was there as a trustee director. There was a cross section of scientific, medical, zoological, conservationist expertise, apart from my contribution on the commercial side.

This ‘trainee retiree’ has now graduated and finally retired!