Born 25th September 1891 in Bishopsteignton, Philip Coombe is remembered for his brave service during the First World War as well as his local accomplishments as a builder. Though some thought him a ‘hard man’, the Coombe family archives shows Philip to have been a lover of poetry, animals and his family. 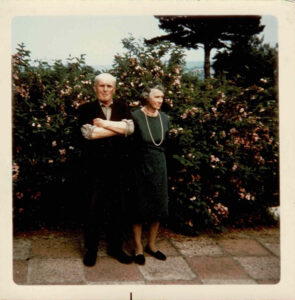 Before the First World War, Philip trained as plumber and heating engineer. In 1913 he went to Canada with his eldest brother Daniel (a.k.a. Peter) Coombe (born 1887). According to his nephew, Robert Coysh, Philip worked in the Canadian Pacific Railway workshops until the beginning of the First World War. 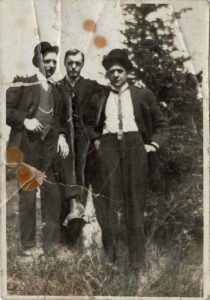 Philip Coombe (centre) and others, probably before the First World War. The two men to Philip’s right and left are yet unidentified.

Philip joined the 20th Battalion Canadian Expeditionary Force and fought with his comrades in some notable battles such as Vimy Ridge and Passchendeale. According to Robert Coysh’s memories, Philip came home wounded three times during the war. In 1915 he was wounded at Ypres. He later became a Sergeant. In 1917 he was at Passchendaele and received the Military Cross. 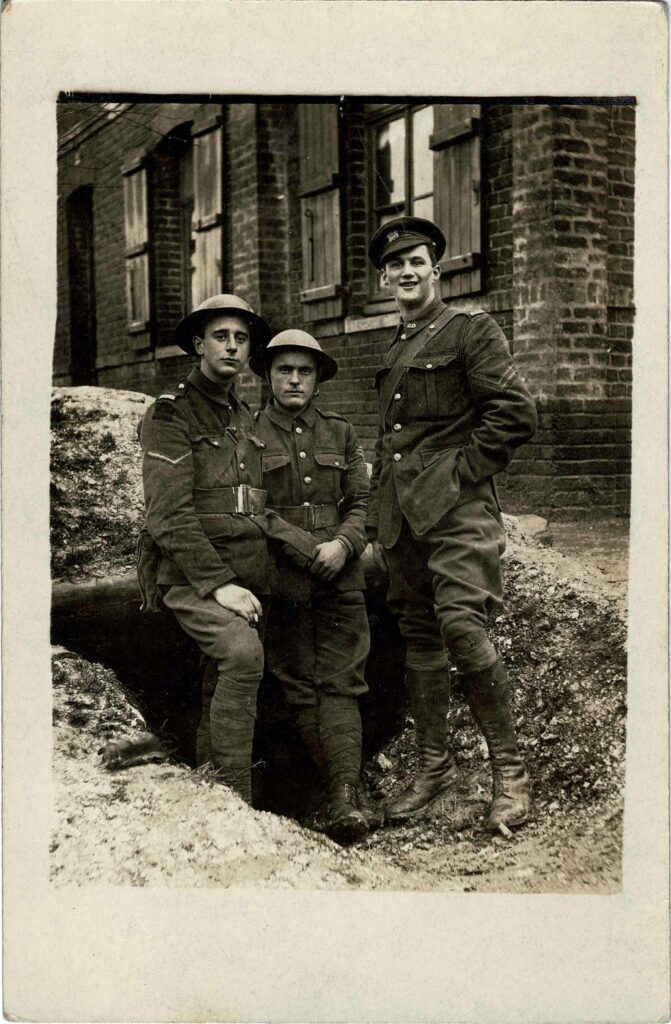 Philip Coombe (centre) and two other soldiers during the First World War. The reverse of this photograph reads ‘Somewhere in France’, ‘Next stop Germany’, ‘Philip’.

This letter, dated November 6th 1917 and entitled ‘In the Line’, was sent from Philip to his mother Mary Coombe née Major. 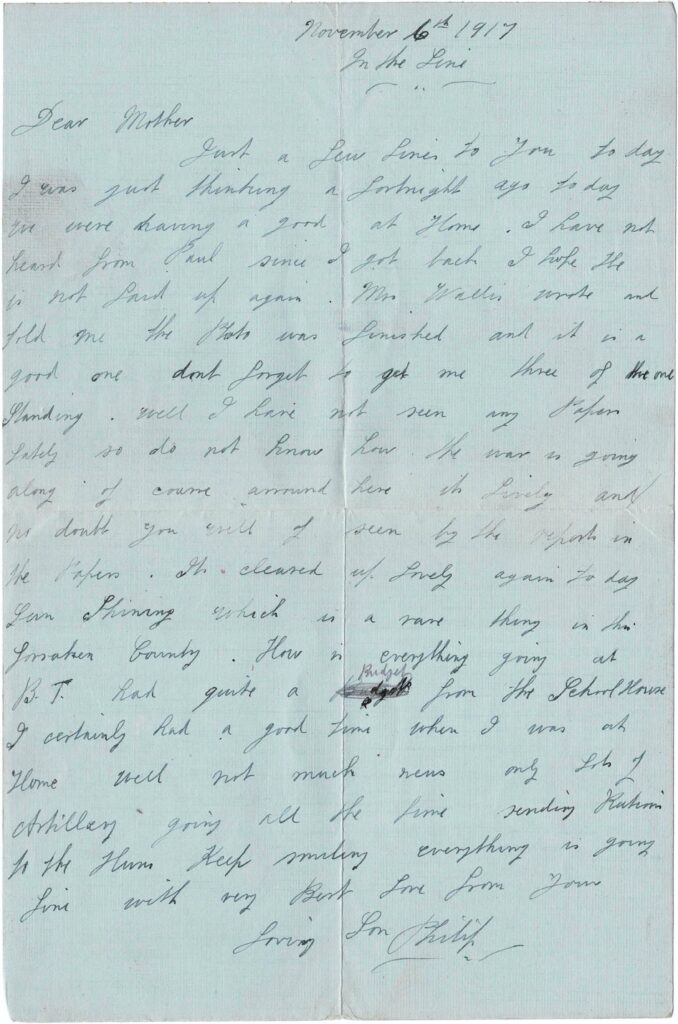 Just a few lines to you to day I was just thinking a fortnight ago today we were having a good at home. I have not heard from Paul since I got back I hope He is not hard up again. Mr Wallis wrote and told me the Photo was finished and it is a food one don’t forget to get me three of the one Standing. Well I have not seen any Papers lately so do not know how the war is going along of course around here its lively and no doubt you will of seen by the reports in the Papers. Its cleared up lovely again to day Sun Shining which is a rare thing in this forsaken Country. How is everything going at B.T. had quite a Budget from the School House I certainly has a good time when I was at Home well not much news only lots of Artillery going all the time sending R[illegible] to the Hunn Keep smiling everything is going fine with very Best love from your loving Son Philip” 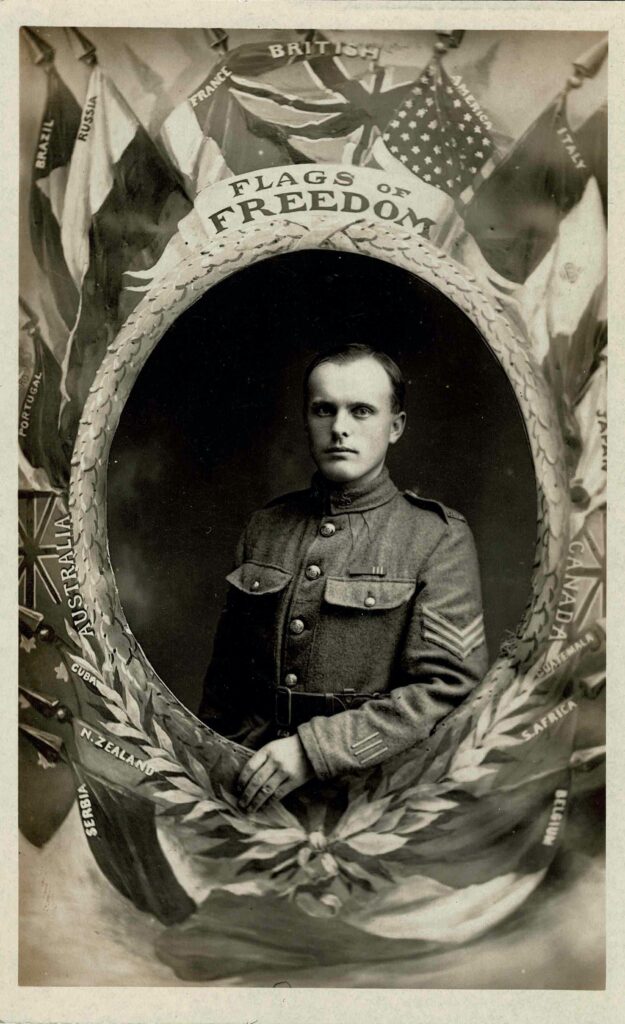 Philip was decorated and received medals including the Distinguished Conduct Medal, awarded to him in 1919. Any help identifying the medals pictured below would be greatly appreciated, you can get in touch via our Contact page! 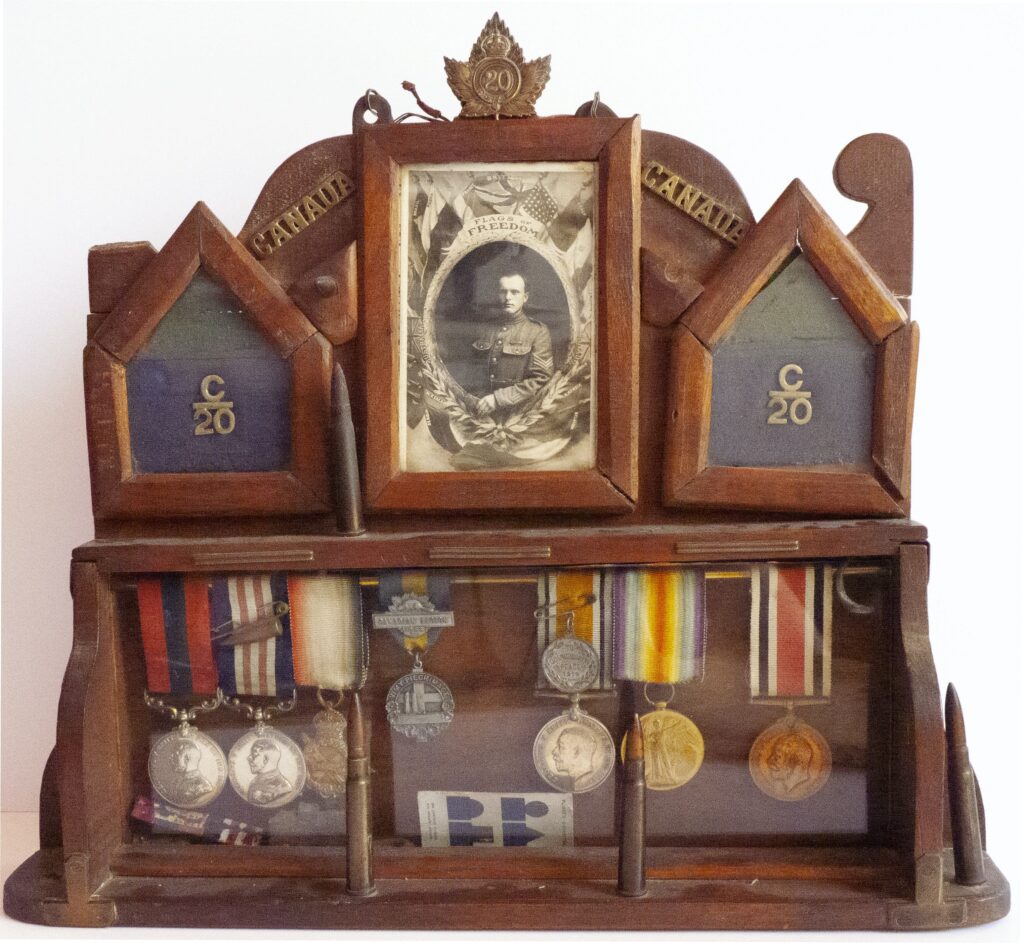 A display of Philip Coombe’s military memorabilia including medals, pins and a photograph.

Philip may have met his wife-to-be Grace Loud through his sister Lois Coombe (1896-1973) who is said to have gone to school in Maidencombe with Grace. 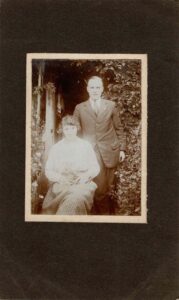 Philip and Grace Coombe, likely shortly after they married in 1925.

Philip and Grace had their only child, Molly, on 18th October 1929. The family lived at ‘Locarno’ which is probably one of the houses on Berry Hill, Bishopsteinton. 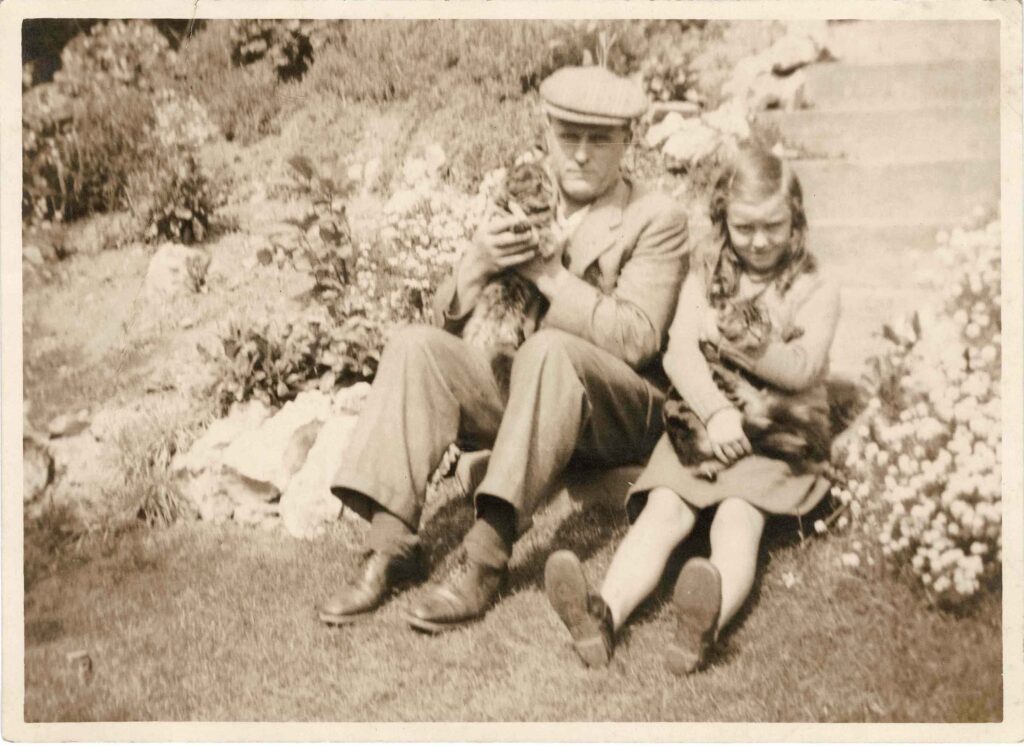 Philip and Molly Coombe in the garden with some of their pet cats. This photo was probably taken in the late 1930s.

Philip Coombe was on the parish council during the Second World War and possibly after, working closely with school master Clifford Wallis, among others. 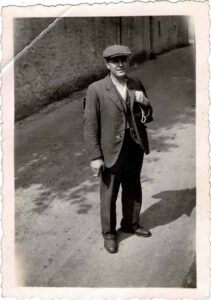 Photograph of a Philip Coombe in 1932, possibly on Fore Street Bishopsteignton.

Philip became well known in the village as a builder. For example, he built Wallis Grove, the Gourds’ garage on Radway and a house on Church Road for Clifford Wallis himself. 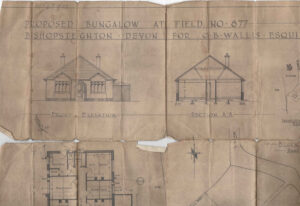 Part of a 1938 plan for a house for ‘C. B. Wallis Esquire’ on ‘Field Number 877’ which is now on Church Road, near St John’s Manor, Bishopsteignton.

Philip died in 1970 leaving behind his wife and daughter.

More information, images and stories will be added to this page over time. If you have anything you would like to contribute, please get in touch!