Bishopsteignton became home to some of Nelson’s admirals during the French Wars. With their prize money they built or bought grand mansions along Forder Lane, and several are buried in the churchyard of St. John’s Church. 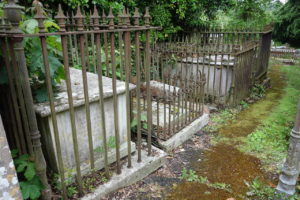 Bishopsteignton became home to some of Nelson’s admirals during the French Wars. With their prize money they built or bought grand mansions along Forder Lane.

fought in both American and French Wars, trained Prince William Henry (later William 1V) in seamanship, and thwarted a French invasion of Ireland in 1798. He built Bishopsteignton Lodge in 1814 (later Murley Grange), razed in 1989. He became Vice Admiral of the UK. His son Edward had a monument erected to him in Exeter Cathedral.

served on the court martial of Captain Bligh, famous for the mutiny on the Bounty. He fought with Nelson in the Glorious 1st of June battle of 1794. He retired to Teignmouth in 1801, but chose to be buried in Bishopsteignton. Six older seamen and six “young maidens” carried his coffin.

fought with Nelson and Admiral Lord Hugh Seymour in the battle of the Glorious 1 June in 1798. Seymour had a resounding victory, which impressed Quinton deeply. He employed local builder and property developer, Thomas Boone, to convert two old cottages on Forder Lane into a fashionable Nash-esque cottage orne, Bishopsteignton’s first. He named it Seymour Cottage, after his hero (now Friston House). Teignmouth lithographer Ernest Croydon included a print of it in his 1817 widely-circulated guidebook.

is not buried here, but his wife, son and grandson are. He fought on board HMS Agamemnon with Nelson and Hardy, but was wounded twice, and was retired from active service aged 23. He came to live at Clanage, Bishopsteignton. His wife Sarah (nee Lamb) of Rye, Sussex, died here in 1818 giving birth to their tenth child. Their son William died in 1823 aged eight, and Noble left the village. He married twice more and was buried at Kensal Green Cemetery, London, in 1855.

The Nobles’ grandson, Coryndon Thomas Putt Luxmoore, later lived at Clanage. He was the last survivor of the Siege of Lucknow, India, in 1857 and was related by marriage to Thomas Putt of Coombe House, Gittisham, Honiton, who had bred a new apple, the Tom Putt. It still exists today.

Other Bishopsteignton naval men of note in the churchyard are CAPTAIN JOHN HENRY RHODES (1788-1864) and his nephew Lieutenant EDWARD YOUNG (1808- 1842), both of Teignlawn. Others with connections to the village are ADMIRAL SIR CHARLES EKINS, ADMIRAL SIR ALAN GARDNER and ADMIRAL SIR GEORGE PARKER of Delamore, Bishopsteignton, whose father, ADMIRAL SIR WILLIAM PARKER, of Delamore, Ivybridge, fought on board HMS Victory with Nelson.

Written by Jenny Ridd for a leaflet in St John’s Church, Bishopsteignton.