A summary of the occupiers of Radway, Bishopsteignton, taken from the official parish records.

This is an area rather that a single dwelling or property.  Radway is derived from Rad, Old English for grass or herbage, and Waie Old English for track or way; so it is the way to the grass feeding land, or Haldon Common where there was common pasture.

1579          The Marriage Register records the marriage between John Comnge at Radway and Julian Bond.

1586          The Baptism Register records the baptism of Frances, daughter of John Cominge of Radwaie.

1588          The Baptism Register records the baptism of John, the son of Thomas Comynge at Radwaie

1589          The Burial Register records the burial of Agnes Comynge the elder at Radwaie, widow.

1590          The Burial Register records the burial of Thomas the son of Thomas Comynge at Radwaie.

1594          A Marriage Record between Robert Bagge and Helene Sawden one of the witnesses is Thomas Comynge of Radwaie.

1611          A sale document records the sale by the Earl of Salisbury to Nicholas the younger of a house and land at Radway. This is the original Upper Radway Farm; the house is now called Lower Radway.

1625          The Marriage Register records the Marriage of Maximilian Comyns of Bishopsteignton to Alice Horrell of Kingsteington, widow. Feb 26th.

1627          An Indenture records the sale of Thomas Commynge of Bishopsteignton and his wife Margerie and his heir apparent Maximilian to Nicholas Balle of Chudleigh land and tenements at Radway for £450.  The area is roughly north of Manor Road and Teignview Road.  Note that in 1653 when Nicholas Balle raised a mortgage he pledged these lands as security.

1665          An Indenture of Fine in the Devon Records office records that Thomas Comyns buys properties in Radway from Christopher Sandford and his wife Catherine.

1674          The Hearth Tax Register shows that Richard Ball of Radway has six hearths.  The only Comyns entry is for Mary Coming with 1 hearth.

1702          The Burial Register records the burial of Agnes, the daughter of Mr Nicholas and Agnes Ball of Radaway, yeoman.

1779          An Indenture for Sale records the sale of relicts of John Balle to James Templer of Higher Radway Estate.

1779          John Balle of Radway died and left his estate of Higher Radway Farm to his three married daughters as co-heirs.  They sold the property to James Templer of Stover Lodge later of Lindridge.

1789          The Baptism Register records the baptism of Hannah the daughter of Henry and Elizabeth Hutchins of Radway.

1792          The Local Tax Assessment  records that Templer owns Higher Radway and that Henry Hutchins is tenant there.  There is no change for 1797, but then Thomas Vooght becomes the tenant.

1798          The Baptism Register records the Baptism of James the son of Thomas Vooght and Mary his wife of Radway.

1804          The churchwardens’ records show that William Coyse is churchwarden for Higher Radway.

1828          The Local Tax Assessment shows Templer as owner of Higher Radway and John Bickley as tenant.

1897          A shooting lease for Radway Farm when John Comyns was the owner shows the tenant as J Hanniford and the farm acreage as 202.

The first building on the right on Radway street follows the line of the original farm outbuildings and the original high red stone wall is still visible.

The house of Radway Farm (Manor Farm) was demolished in 1965 without permission.

Lower Radway Farm later became known as Manor Farm and the farm demesne was replaced by a building development known as Grandisson Avenue.

1956 A new farm house is built near Rowden Cross to replace Higher Radway Farm which was originally on Radway Street. 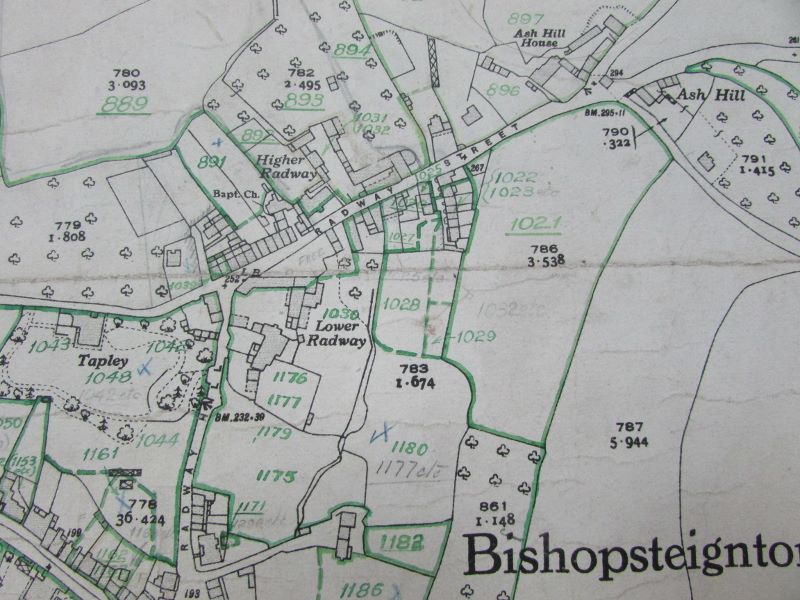 W.J. Ryder’s Supply Store and Family Butcher
Evacuees
Arthur Apps WW1
William Ernest Back WW1
St. John’s House
Tea, cake and memories with Mrs Bulley and Miss Webber – March 1979.
The Back Family
Charles Henry Back WW1
Ernest John Passmore WW1
Myrtle/Wisteria Cottage
We use cookies to ensure that we give you the best experience on our website. If you continue to use this site we will assume that you are happy with it.OkPrivacy policy