John Harvey McGregor (known as Jack), his wife Audrey Pamela (Pam) Brooke lived mainly in Surrey with their two sons John (b. 1937) and Richard (b. 1939). In September 1940 they moved to Devon to escape the blitz, and it was then that they came to live in Bishopsteignton.

John Harvey McGregor served on H.M.S. Neptune in the Royal Navy as Paymaster Commander (Acting). HMS Neptune sailed from Chatham in May 1941 on its last voyage. He died at sea in Libyan waters on 19th December, 1941 and appears on the Bishopsteignton War Memorial. 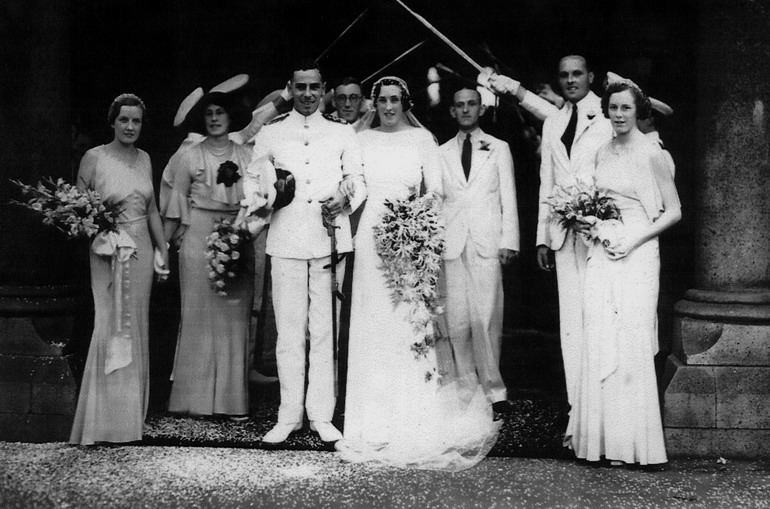 Jack’s sons, John and Richard both remember their time in Bishopsteignton very well (1940-1948).

“We lived (as a tenant) in four different houses. At first we lived at Radway House which was opposite the old Gourds bus depot. Then we moved to a house called Greenways which was near Huntly. Next we lived at White Lodge at the top of Berry Hill, and finally at Manor Farm at the top of Radway Hill. Manor Farm was owned by Percy Dawe from the Dawe’s farm family and he was married to Lilian who had been a Gourd. They had a daughter called Christine who was almost exactly the same age as Richard. When I revisited Bishopsteignton in 1964 Manor Farm was literally a pile of rubble as it had obviously just been demolished for redevelopment. I have only been back to Bishopsteignton 3 or 4 times since we left and the last time was in 1999. Then I met Philip Gourd in the museum who was the youngest of the brothers who drove the buses when we were there, and he remembered my mother. I gather he died in 2013 aged 93.

I remember the buses well as I used to travel on them to school in Teignmouth for two or three years. We finally left Bishopsteignton in March 1948, after seven and a half years there, and we moved back to Surrey. One of the last things I remember doing in the village was going to the re-dedication of the War Memorial to those who fell in WW2 with my mother on 29 February 1948 (the day before my ninth birthday). (John was not there as he was away at boarding school). I know this because my mother kept a copy of the Teignmouth Post and Gazette which I now have.”

After the War, Audrey Pamela McGregor married a widower, Errol S Barraclough (known as Budge), and they lived in Surrey until his death in 1965. Pam continued to live in Surrey until her own passing in July 2001.

John McGregor followed his father into the Royal Navy. He went on to serve as a Commander on both submarines and big ships, in 1982 his actions in the Falklands earned him an O.B.E. He now lives in Kent with his wife, and has two children and five grandchildren.

Richard McGregor qualified as a chartered accountant before working for an industrial group in Berkshire. He now lives in Wiltshire with his wife, and has three children and nine grandchildren.