2021 is the year that the latest British census will be completed. This article will explain just what the census is and it’s importance to the country, and encourage the younger generation to get involved and understand it.

Bishopsteignton Football Club celebrated its 100th anniversary on the 15th October 2020.  This is the club’s story highlighting the ‘highs and lows’ throughout the years, those that were involved to make the club successful including managers, players and helpers, players’ successes, a gallery of photos identifying the members, events and artefacts.

Many current and past members of 1st Bishopsteignton Scout Group have participated in local, national, and international Jamborees; this article will tell you about the differences between the Scout Jamborees in the past and present and give you an idea about what it’s like to attend one.

Born 14th April 1898, Grace Winiefred Coombe née Loud was wife to Philip Coombe and mother to Molly Coombe. Grace married Philip in 1925 and lived at ‘Locarno’ for many years, probably until her death in 1983.

A gem of early 20th Century village History, captured by a local family. 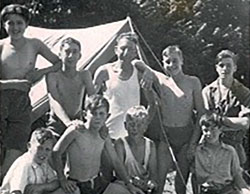 We are very excited to be helping with this project, which is to be part of a Duke of Edinburgh’s Award scheme undertaken by one of the Explorer Scouts. Many of the artefacts and photographs of scouting memorabilia that had once been in the Bishopsteignton Museum are now in the possession of the Scout group, and we shall be assisting with the project in terms of training in researching, archiving, interviewing, scanning, and uploading onto the Bishopsteignton Heritage website. 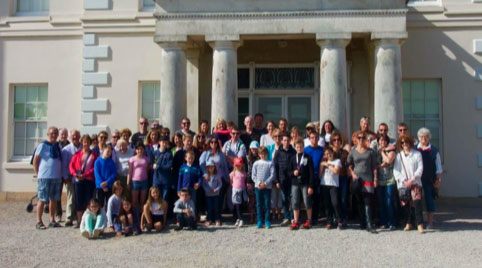 2020 marked the 25th Anniversary of the Twinning Association, which could not be celebrated. With the death of Maggie Sullivan, a founder member, her collection of documents and memorabilia has gone to the Association so we are intending to put together a suitable memorial and celebration of the history of this popular Village group.

If you are interested in the Twinning Association or are a past or present member with stories to tell, or photographs of your own experience, please get in touch and join the research team on this project. 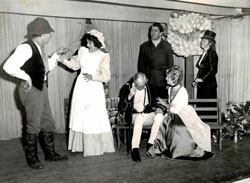 Here at BH we have several photo albums in the archive of past Players’ productions, along with the the history of the children’s theatre, several programmes and photos. Many villagers are still living who participated in the productions and may have more photographic evidence in their own collections.

The first Players production was in the 1960s so there could well be another anniversary coming up! Meanwhile, the current Players are still going strong, and have even managed to stage a production outdoors, during the pandemic.

Born 25th September 1891 in Bishopsteignton, Philip Coombe is remembered for his brave service during the First World War as well as his local accomplishments as a builder. Though some thought him a ‘hard man’, the Coombe family archives shows Philip to have been a lover of poetry, animals and his family.

Molly Coombe (1929-2007) was the only child of Philip (1891-1970) and Grace Coombe née Loud (1898-1983). The Coombe family have left an incredible mark on the village of Bishopsteignton. From memories of Molly as a home-owner and landlady to streets of houses built by Philip, the Coombes remain a part of many households in the village.

Here, the compilation and presentation of information about this family is dedicated to the memory of Molly Coombe who’s legacy has been put to fine use in developing the Bishopsteignton Heritage Project for the benefit of the whole community. In these articles I hope that the long-silent voices of Molly, her parents and relations, can again be heard telling stories of life in Bishopsteignton and sharing the humble and steadfast love for this village which emanates from every record in the family archive.